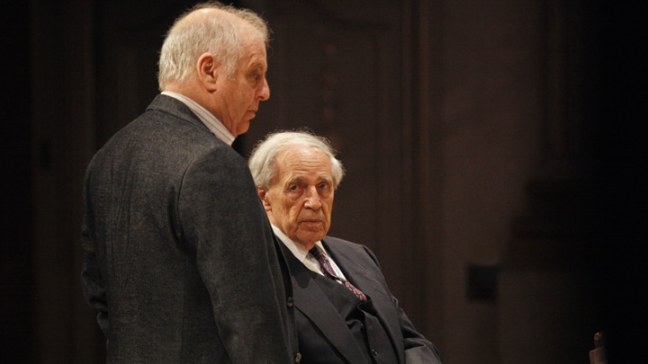 Names like Iannis Xenakis (1922-2001), Karlheinz Stockhausen (1928-2007) and Pierre Boulez (1925-2016) often sound alarms in the minds of music-lovers attuned to Mozart or Mendelssohn, Bach, Beethoven or Brahms, or, perhaps still more off-puttingly, in those who favour pop, rock, jazz, soul, hip-hop or all manner of ‘popular’ music. It’s perhaps hardly surprising if most folks are wary of – or just not interested in – trying out ‘new music’ produced for the concert halls which in less extraordinary times attract classical fans. Most people like a clear tune and rhythm, rather than melodic fragments and a pulse. Indeed, I’ll admit I myself am still mixed about the first two of the aforementioned composers; sometimes they please, at others they simply feel too ‘difficult’. But I include those dates as a reminder that these iconoclasts began their groundbreaking work soon after World War Two – many decades ago, in other words – so their music is not that ‘new’. Moreover, Boulez, who as a composer, conductor and advocate of certain earlier composers’ work knew a great deal about musical colour, was a little different – a little more accessible perhaps – and undeniably influential. By way of tribute, an auditorium for chamber music was named after him in Berlin, and that is where a four-day online festival of new music has just taken place, curated by the veteran conductor and pianist Daniel Barenboim (pictured above with Boulez on the latter’s 85th birthday) and the acclaimed flautist Emmanuel Pahud.

The festival – available for 30 days on YouTube or Facebook – serves as a rather wonderful introduction both to the music of Boulez himself and to that of ten living composers who contributed pieces to be premiered, in accordance with social distancing, in the Pierre Boulez Saal. This, I should emphasise, is rather different from the four weeks of glorious lunchtime concerts provided under lockdown in June by London’s Wigmore Hall. Excellent musicianship is again a given, but the Berlin project is primarily about introducing audiences and musicians alike not only to some new works but to developing ideas about how new music might take its place in this recently changed world. Each of the four sessions includes performances of a piece by Boulez and two or three newly commissioned chamberworks, but also features lengthy discussion of the pieces, of our current situation, of music’s role in society, and much else. Too lengthy for some, perhaps, but most of the talk is fascinating, and quite a bit of it prompted by questions from those watching the concerts; I was taken by the informality of the project from the first programme, and somewhat addicted – and moved –  by the end of the fourth and final one. It helped that both the opening Boulez pieces and the new commissions were so enjoyable. Of the latter, if forced to select favourites, I’d opt for the pieces by Johannes Boris Borowski, Matthias Pintscher, Benjamin Attahir and Jörg Widmann. The fourth, presented as the last of the ten premieres, I found particularly impressive, dealing as it did with silence and sound, darkness and light, separation and togetherness, and deploying poignant, faintly melancholic motifs that reminded me, at any rate, of greetings and farewells.

The project, which had the subtitle Distance/Intimacy, struck me as admirable on various fronts, not least because all the musicians and composers were working for free in solidarity with their peers. Of course, the music, and indeed the discussions, won’t be to everyone’s taste. But I’m writing this simply to alert you to what I found to be a fascinating and illuminating few hours of music and conversation. If you’ve ever felt remotely curious about this kind of music, but have balked at the idea of spending the time and money to sample it in a concert hall, here is a chance to discover more for free (though you can make a donation if you like) in the comfort of your own home. All you need to do is visit the venue’s website or access the concerts on YouTube; each session will remain available for 30 days after it first appeared live.