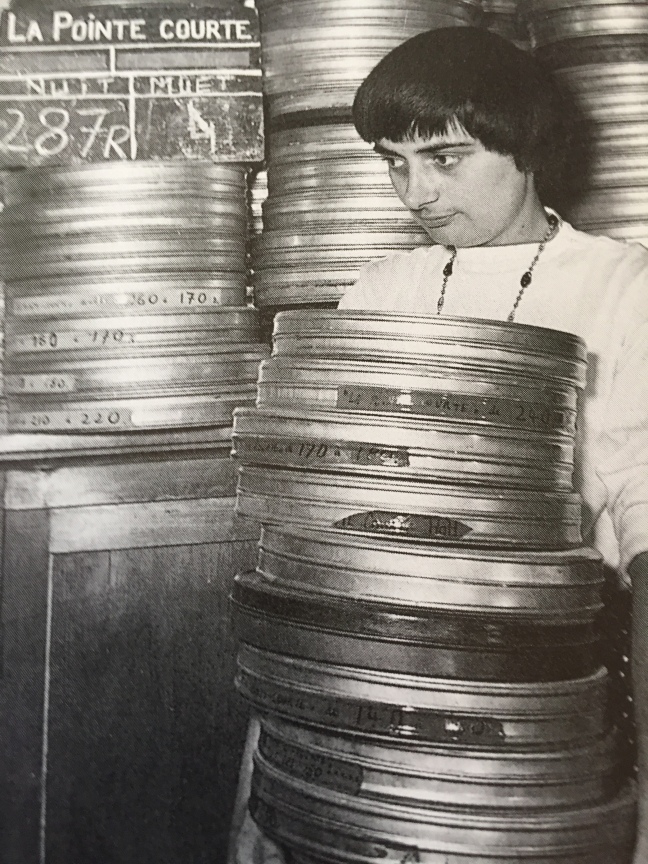 Some hours after the announcement of the death of Agnès Varda, my friend Nick James – editor of Sight & Sound magazine – felt moved to tweet that his Twitter feed was so choked with tributes, it felt as if Varda was the Bowie of cinema. ‘Perhaps she was,’ he added. It was an intriguing observation, and one I’ve been thinking about a little. Certainly, in the last few years Varda’s profile  – both literal, topped by that very distinctive haircut, and metaphorical – had risen to a point where both professional obituary writers and fans were piling on the superlatives. I suspect the combination of the success of Faces, Places, the honorary Oscar, her recent appearance at the Berlinale with Varda par Agnès, and sheer longevity may have had something to do with this state of affairs; after all, for much of her professional life, Varda and her films were familiar only to cinephiles. Still, she was undoubtedly an important, influential and very impressive filmmaker.  And like Bowie, she kept on working to the very end, by which time she was readily confronting/discussing ageing, illness and mortality; like Bowie, she kept on reinventing herself (while remaining absolutely true to herself), having made her name as a photographer before moving into filmmaking, and finally establishing herself as an installation artist; and, just as Bowie was rather more than ‘just’ a singer, musician and songwriter, Varda was rather more than ‘just’ a filmmaker. She was quite simply an artist, whatever medium she happened to be working in; even her life became, perhaps, a work of art.

I’m not about to add in any detail to the many assessments of her greatness or otherwise as a filmmaker; suffice to say that as with many directors, her output could be uneven, but she made more than enough very fine movies to be assured of a place in the cinematic pantheon. (For the record, my own favourites are Cléo de 5 à 7, Le Bonheur, Vagabond and the documentaries – though that term barely does justice to the highly distinctive blend of diary, essay, travelogue, remembrance, theorising and heartfelt humanism that one finds in most of those films.) However, news of her death inevitably brought back memories of my own encounters with her over the years – only a few, but enough to provide some idea, I think, of her character and what made her tick.

My first encounter with her was in 1994, over a smallish dinner given in her honour at London’s French Institute; I’d been invited in my capacity as the editor of the film section of Time Out, and while I had by that time seen only a handful of her films, I keenly accepted, not least because I was an enormous admirer of some of the films made by her late husband, Jacques Demy. When I told her this, and mentioned that I’d interviewed Demy (sadly, only over the phone) for a revival of Lola, Varda became noticeably friendlier; she appeared to be happier discussing his work than talking about her own. The evening ended with a gift: a book (Varda par Agnès) published by Cahiers du Cinéma. I now wish, of course, that I had had the temerity to ask her to sign it.

Temerity? Why, you may ask, when Varda comes across as such a sweetie in her films? Well, she didn’t get where she did in the profoundly patriarchal world of cinema by being a sweetie all the time. She knew her own mind, she knew what she wanted, and she knew how to get it. I saw this side of her personality ten years later at the Locarno Film Festival, when I went along to a screening of her film Cinévardaphoto. She was due to introduce it, but appeared to have forgotten all about it, so around 15 minutes after the screening was due to begin, the festival organisers decided to give up waiting and start the movie. It began, and everyone was quietly enjoying it when suddenly, about 10 minutes into the film, a small but instantly recognisable figure could be seen and heard entering the darkness of the auditorium, weighed down by a couple of bulky shopping bags. A minute or so later the film shuddered to a halt; Varda had insisted on introducing it after all, rather than staying till the end for a Q&A. She spoke for about five minutes, then we were back to the film – by which I mean back to its very beginning, because she didn’t want us simply to continue from where it had been interrupted. Consequently, the audience – probably about 1000 people strong – left the screening about half an hour later than expected; I missed my next movie, so was a little annoyed. That said, I still liked Cinévardaphoto enough to recommend it to the London Film Festival. (Varda was a pretty frequent visitor to the LFF over the years.)

We had a similar problem at BFI Southbank when Varda came over, with her daughter Rosalie, to introduce some screenings in a Demy retrospective; we were never entirely sure whether she would turn up for an introduction or be off visiting the Tate Modern or the Hayward. (Happily, Rosalie would stand in if necessary.) But at the same time Varda could be very warm and generous. My own last encounter with her was last year, at a lunch given for her and JR, her co-director on Faces, Places, at the French Ambassador’s residence. Since everyone else there was either French or extremely fluent in French, the conversation naturally kicked off in that language, which meant that I – who can manage a fairly simple dialogue with one or two people, but not a fast-flowing, free-wheeling conversation with nine or ten – was pretty lost some of the time. Fortunately I had been seated next to Varda, who soon noticed my slightly (but politely) perplexed expression and asked whether I could follow everything. After I admitted that quite a lot of the talk was passing me by, she took to translating for me, and very subtly but surely set about gradually turning the conversation around so that it became mostly in English. She need not have done that – everyone else present would have been fine continuing in French – but as we know from her films, she had a strong sense of what is fair and unfair, and a deep sympathy for the underdog. That day, I was fortunate enough to be the beneficiary of those characteristics.

That was the last time I saw Varda, unless one counts her inimitable presence in her lovely final film Varda par Agnès, which I briefly wrote about here. The film is another reminder that she was a consummate artist; certainly, I for one would dearly love to see an exhibition of her photography. (Or if that’s not possible, how about a book?) In the meantime, we still have her films, for which Varda deserves our gratitude; she certainly has mine.