Year in, year out, Easter throws up gigs galore with music that’s good for the soul: Bach, of course – especially the Passions, for obvious reasons – but also masses, motets and so on by the likes of Pärt, Pergolesi or Poulenc, Tavener, Taverner or Tallis, not to mention Handel’s inevitable Messiah. Evidently, the profound well-being of the soul is linked at some mysterious level with choral music. But I’d like to draw attention to something a little different.

Over the last few months, the ECM label – probably best known as the home of Keith Jarrett and Scandinavian music, though its extraordinarily genre-busting output ranges far more widely than that – has released some very fine work by British jazzers. But while I’ve greatly enjoyed the new albums from the Andy Sheppard Quartet (Romaria), Django Bates’ Belovèd (The Study of Touch) and ECM veterans John Surman (Invisible Threads) and Norma Winstone (Descansado), the one I’ve probably found most intriguing – and who knows, perhaps the most rewarding? – is by pianist-composer Kit Downes (pictured above). Not that Obsidian could be described in any meaningful way as a jazz album (even though it is partly improvised), since it consists of ten compositions for church organ. Hence the Easter connection, in my mind at least.

To be more accurate, the compositions are for three separate church organs: one large (the three-manual instrument at London’s Union Chapel), one medium-sized and one small (organs with, respectively, two manuals and a single manual in a couple of East Suffolk churches). The sounds they produce, of course, are rather different, due partly to the instruments themselves, partly to the acoustic properties of the buildings they inhabit. Downes, who was a chorister and church organist in Norwich before becoming a professional jazz musician, plays both to and with these differences in a selection of compositions which is pleasingly varied yet admirably coherent. The opening Kings, for example, played on the Union Chapel organ, has a brooding majesty, its steady procession of low pulse-notes overlaid with higher scales suggestive of fanfares, whereas the closing The Gift, for the single-manual instrument, has a tender, quiet simplicity evocative almost of a folk song. (In fact, the melody is from a hymn written by Downes’ father.)

In between, we have a genuine traditional folk song (Black Is the Colour) imaginatively reworked with passages sounding not unlike the mournful Uilleann pipes; what Downes calls a ‘structured improvisation’ (Rings of Saturn) which whistles and wheezes, drones and drifts its dreamy way through a series of different sounds and chords; something nearly but not quite suggestive of a jazz improvisation for solo keyboard (Seeing Things), skittishly playing hide-and-seek with what might almost be a melody; and Modern Gods, the one track where Downes duets with another musician – saxophonist Tom Challenger – though, to be frank, it’s occasionally tricky, as organ and tenor rise to a roaring climax, to tell precisely which sound is being produced on which instrument. 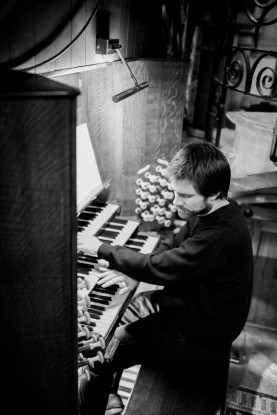 The subsequent tracks are played on the smaller Suffolk organs, but the moods continue to vary in their own strangely unified way: The Bone Gambler is quiet, slow, ruminative, even funereal; Flying Foxes a running, jumping and standing-still fantasia, predominantly and fittingly in the upper register; Ruth’s Song for the Sea a gently wistful refrain that now and then threatens to circle in on itself and stall; and Last Leviathan a stately, measured march that eventually turns into a floating, slowly shape-shifting cloud of sound.

So is this music good for Easter? Hymn-tune and church environments notwithstanding, to this listener it certainly doesn’t seem to be specifically ‘religious’ music, though I can imagine some might choose to designate it as in some way ‘spiritual’. Whatever, it’s undoubtedly music that is far from easily categorisable, and as such takes a bit of listening to before its very special qualities reveal themselves. I’d simply suggest, then, that it’s good music for Easter and beyond… You can watch/listen to the promotional video below, check the album out at the usual places or, better still, pull the stops out and treat yourself to the CD.