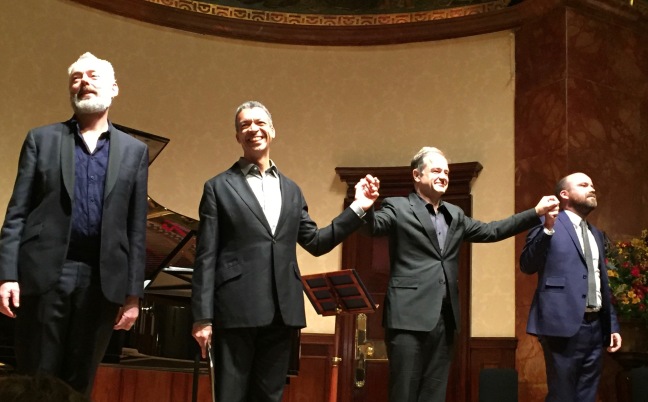 As anyone who follows me on Twitter probably knows, I these days spend a very pleasurably inordinate amount of my time attending concerts at London’s Wigmore Hall. Only during the last decade have I become a regular there; while I’ve always liked classical music, for many years I behaved (unwittingly) as if I wanted some sort of ‘value for money’, so I focused mainly on symphonies, concertos and other ‘big’ pieces, thus remaining woefully ignorant about chamber music. Still, having realised my error – besides lacking nothing in the potential for power and intensity, smaller-scale works can often offer greater musical clarity – I’ve been trying to make up for all those lost years. Happily, London – as with every other kind of music – boasts a range of venues specialising in chamber music; as for the Wigmore, its extraordinary acoustic and its daily provision of top-grade international artists make it one of the finest venues for chamber music in the world.

So it was that in the space of less than a week, I managed to catch three very different concerts which could hardly have been bettered. The first was pianist Angela Hewitt’s interpretation of the first book of Bach’s The Well-tempered Clavier; notwithstanding a recent injury that meant she had to be moved to and from the stage in a wheelchair, her playing was as fine as ever. A few nights on, German clarinettist-composer Jörg Widmann and the Hagen Quartet situated the UK premiere of his marvellously imaginative and lyrical Clarinet Quintet between likewise superb performances of Webern’s String Quartet and Mozart’s Clarinet Quintet. Finally, two evenings later, the Wigmore delivered a night that I’ll remember for a very long time with a concert entitled ‘Songs of the Sea’.

The title at the top of this blog could, I suppose, be taken as an allusion to Roy Ward Baker’s 1958 film about the sinking of the Titanic, but as far as this particular musical voyage was concerned – undertaken as it was by such dependably terrific performers as baritone Mark Padmore, tenor Roderick Williams and pianist Julius Drake, with no little help from actor Rory Kinnear – there was never any danger of it coming to grief. Why was Kinnear on board? Well, the ‘songs’ included not only actual songs – many of them settings of poems by the likes of Masefield, Hardy, Baudelaire, Shakespeare, Goethe and Heine – but readings of verse, appropriately interspersed between the musical pieces, by writers as diverse as Christina Rossetti and Robert Frost, Lawrence Durrell and Stevie Smith, Matthew Arnold and Emily Dickinson.

Admittedly, in the concert’s first half some of these spoken elements – notwithstanding Kinnear’s subtle, sensitive delivery – were perhaps a little too densely poetic to be entirely intelligible on the spot; probably easier to take in on the printed page, they were unfortunately not included in the programme booklet alongside the lyrics to the songs. So while Frost’s ‘Neither Out Far Nor In Deep’, Dickinson’s ‘Wild nights – wild nights!’ and Smith’s ‘Not waving but drowning’ worked perfectly well – the last, in particular, leading beautifully into Tippett’s setting of Shakespeare’s ‘Full Fathom Five’ – Wallace Stevens’ ‘The Idea of Order at Key West’ sat a little less comfortably between songs by Fauré and Duparc. This remains a minor quibble, however, since the musicianship was so impressive throughout: for me, the most enjoyable moments of the first half were the aforementioned Tippett, Finzi’s ‘Channel Firing’, Rebecca Clarke’s ‘The Seal Man’ and Elgar’s ‘Sea Slumber Song’.

In the second half, there was no cause for even minor reservations. The poems – including Kipling, Tennyson, Elizabeth Bishop’s ‘I caught a tremendous fish’, and the perhaps inevitable extract from Coleridge’s evergreen ‘The Rime of the Ancient Mariner’ – worked better here, both in their own right and as imaginative bridges between the judiciously selected compositions by Mendelssohn, Schubert, Brahms, Wolf, Elgar and Britten. Anyone expecting the concert to close on a sombre note – as I almost had, given the prevalence of German Romanticism and the elegiac mood of Elgar’s ‘Where Corals Lie’ and Britten’s ‘Tom Bowling’ and ‘Sail On, Sail On’ – was surely surprised by the change of tack that occurred when Kinnear stood up to deliver his final reading – expert, exhilaratingly dramatic, deliciously funny – of Edward Lear’s ‘The Jumblies’. When this was followed by Padmore and Williams joining forces for Victor Hely-Hutchinson’s setting of Lear’s ‘The Owl and the Pussycat’, the audience could not have been more delighted; having, as it were, reached safe haven at the end of a sometimes tempestuous journey, they could laugh as well as show appreciation of the ubiquitous musical brilliance on offer. (You can see how well this went down in Leeds a couple of years ago in the YouTube clip below.)

I mention this because, when there are not one but two singers of the standing of Williams and Padmore on stage – and so wonderful was their singing, separately or together, throughout the concert that it would be invidious here to single out any one song as a highlight – it is all too easy to underplay the contribution made by the pianist; suffice to add that Drake was superb from start to finish. Indeed, as if to remind us that this really had been a four-man show – and, perhaps, to acknowledge that some of the songs included in this musical odyssey were not necessarily about the sea but other bodies of water – the encore was an a cappella rendition of ‘Oh Shenandoah (Across the Wide Missouri)’, with Drake and Kinnear both demonstrating good, clear, strong singing voices. (Standing there singing between Padmore and Williams must surely have taken a little courage, methinks, but each sailed through it with flying colours.) It was, in short, a magical ending to a magnificent evening.

The photo of Mark Padmore, Roderick Williams, Julius Drake and Rory Kinnear at the Wigmore Hall was taken by Geoff Andrew. There are more clips on YouTube of Padmore, Williams and Drake performing some of the material described here at the Leeds Lieder Festival in 2016.