Though I don’t keep up with new jazz releases as much as I’d like, there’s a side of me that’s sufficiently completist for me to at least try to monitor anything featuring certain long-time favourites, be they dead or alive. And for anyone who shares my tastes, there’s a wealth of riches newly available, not only in terms of albums just released, but also in the shape of a welcome book.

One album – Life Goes On (ECM) by Carla Bley, Andy Sheppard and Steve Swallow – I’ve sort of already written about, since I covered a live concert the Trio gave in London a few months ago; the material on the album is much the same as what they played at King’s Place, so it comes strongly recommended for all the reasons I gave then. The other two albums are both belated but still highly enjoyable releases of live gigs that took place years ago. 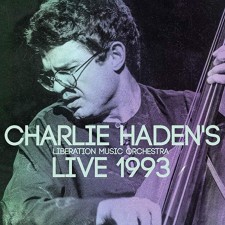 One, from the Equinox label, is Charlie Haden’s Liberation Music Orchestra Live 1993, on which the late, great bassist-composer and his band play the numbers that first appeared on the 1990 album Dream Keeper. (Note that ‘Tale of the Tornado’ on the new album is the same Silvio Rodriguez tune that appeared as ‘Rabo de Nube’ on Dream Keeper.) Recorded in Boston for local radio, the gig boasts most of the musicians who featured on the earlier album; the most notable absences are Carla Bley, who arranged the album and composed parts of the 40-minute ‘Dream Keeper’ suite, Dewey Redman, Branford Marsalis and the Oakland Youth Chorus, but that means we still get to hear such Liberation Music Orchestra stalwarts as Joe Lovano, Tom Harrell, Ahnee Sharon Freeman and Mick Goodrick. Needless to say, the music – largely Latin or African in style, compiled as a protest against racial inequality and injustice, and performed/improvised rather more expansively here than on the 1990 album – is stirring and superbly played throughout.

That can also be said for an even more unexpected blast from the past, just released by My Only Desire Records on vinyl and CD. Love and Understanding – Citadel/Room 315 Sweden ’74 is a recording of Mike Westbrook’s monumental suite ‘Citadel/Room 315’ made in Stockholm almost exactly a year before the London sessions by the Westbrook Orchestra put out by RCA in 1975. Apart from pianist-composer Westbrook and lead soloist John Surman – equally impressive on soprano sax, baritone sax and bass clarinet – the musicians are completely different on the new release, since the piece was commissioned by Swedish Radio; the band in this instance, giving the suite’s first performance, was the Swedish Radio Jazz Group of top-grade musicians, many of whom had previously performed with George Russell. If I still slightly prefer the later London recording (not least for the solos from Brian Godding on ‘Construction’ and from Henry Lowther at the end of ‘Love and Understanding’), that certainly doesn’t mean the Swedish session is in any way significantly inferior; indeed, it is just a little different in various ways. (Westbrook himself, in the notes that accompany the disc, speaks of ‘a temperamental difference… The well known coolness of the Scandinavian musicians is there. They’re very laid back.’) Whatever the subtle differences, the Swedes undoubtedly deliver; the piece sounds as splendid as ever, ranging from lyrical to wild, funky to free, mellow to muscular, and Surman is as ferocious, tender, powerful and consistently imaginative as he was on the later London recordings. 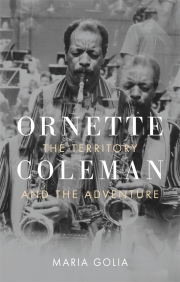 Finally, to the aforementioned book, and arguably to the most extraordinary of all the musicians mentioned here: Haden’s old associate, the late and very, very great Ornette Coleman (pictured at top). Published by Reaktion Books, Maria Golia’s Ornette Coleman: The Territory and the Adventure is a welcome dip into the life and times of one of the most important and (in certain ways) most influential innovators of twentieth-century music. Golia looks not only at Coleman’s background and early years in Fort Worth, Texas, his blossoming in the New York art scene of the late 50s and 60s, and his continuing experiments with musical structure and sound up until his death in 2015, but also at the world he lived in and had to deal with. Indeed, one of the strengths of this painstakingly researched book is its emphasis on context, even if Golia – who worked for a while at Fort Worth’s Caravan of Dreams arts complex – sometimes takes extended detours from her main subject to deal in excessive detail with subsidiary topics. (In particular, and perhaps unsurprisingly, she tells us more than we need to know about the history of the Caravan of Dreams itself.) Occasionally, her mostly very readable prose can turn a little purple, and some of her quasi-philosophical musings almost – but thankfully not quite – rival Ornette’s own verbally vague eccentricities. But she should be applauded for according him the time, space and respect he deserves, and for recognising the scale of his achievements in a world generally deeply hostile not only to black artists but to revolutionary innovators.

One of the book’s weaknesses is that we get little sense of Ornette the man; Golia, by her own admission. met her subject once only for a few hours in Forth Worth, and he remains a faintly shadowy, nebulous figure throughout. (That said, having interviewed Ornette myself around the time of In All Languages, I fully sympathise with her attempts to make sense of some of his characteristically abstract or metaphorical statements regarding his worldview and his music.) Another failing is that she’s not great at conveying what Ornette’s music sounds like, nor why it remains so exciting and so important; again, Golia openly admits that when she actually met him, she wasn’t a great fan of his music, which she found too difficult – which may explain her failure to get to grips with writing about it. Still, she and her publishers are probably safe in assuming that most people opening the volume will probably already be pretty familiar with the music. (To take myself as an example, once I’d discovered his music in my early 20s, I made sure I caught Ornette’s each and every gig in London until his demise, and I’ve never tired of revisiting his many albums. But if you haven’t yet heard Coleman’s music, do try listening to ‘Law Years’ from the album Science Fiction, on the link at the bottom of this piece; an exhilarating sample of his work, it opens with some wonderful bass-playing from the aforementioned Charlie Haden.)

Whatever its flaws, it’s heartening that Golia’s book exists. Five years now since he died, of course there ought to be a Coleman biography. Golia’s research ensures that it’s rich in historical and biographical detail, so until someone better equipped to write about the music decides to write about the life of one of the greatest, most distinctively original and immediately recognisable composers and performers of modern times, this book will have to suffice.

Photography of Ornette Coleman at top by/courtesy of Frank Schindelbeck.